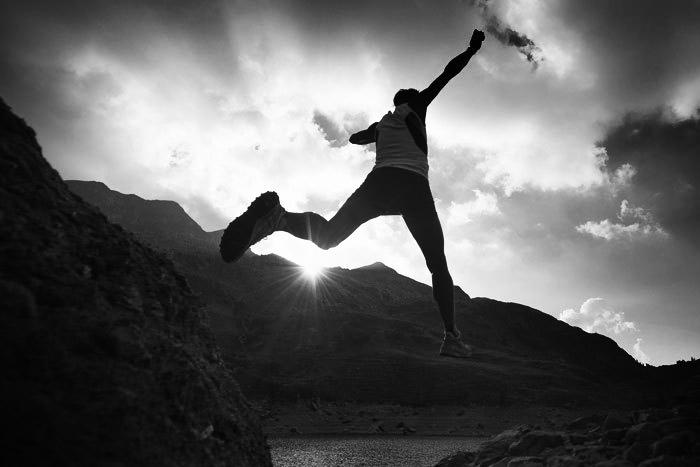 I’ve said it before, but I spent the bulk of my life super sheltered and isolated. Too scared to experience the outside ‘sinful’ world, too scared to rebel or to not follow the rules or to try anything new or different. Out of fear of failure. Out of fear of doing something ‘wrong’ and making a mistake.

Then I watched a movie. And ok … this is going to sound dumb, but it’s literally the truth. I watched ‘Yes Man’ and oddly enough, it changed something in me. It was a silly movie but it made me realize how much I was missing out on by saying no to everything that scared me or made me uncomfortable.

So then, when a girl I worked with (and wanted to befriend) asked me to take a muay thai/conditioning class with her on a Saturday morning, I heard all the old familiar voices in my head saying, ‘no, don’t do it. It’s scary. You’re too fat. You’re going to look stupid.’

But underneath those old familiar voices was something new. A tingle of excitement. A curiosity. What if said … yes, instead of no? What could that mean for me?

So I did it. I took a leap and I gave something completely new a shot. I need to give you a little bit of context too – I was never in my life an athlete or someone who worked out. I’m not coordinated or agile. I quit PE in junior high because they tried to make us run a mile one time and I thought that was just torture. So let me tell you, saying YES to a kickboxing and conditioning class was incredibly terrifying for my totally out of shape, never-ever-been-in-shape ass.

Needless to say, that first class was tough and scary and I did look foolish, but I survived and it was wonderful. And more importantly, I learned of the exhilarating rush that comes from pushing yourself beyond your comfort zone and trying something new.

I was hooked. After that first time of saying yes, I began to say yes to a lot of new things. New social experiences. New friends. New job opportunities. When I’d feel that tingle of excitement coupled with that voice that says ‘oh no, not you, you can’t possibly do that’, I knew that it was likely something I absolutely HAD to do.

And so I conditioned myself to run towards the things I was most frightened of.

Leaving a stable but unhappy relationship to try being single, living on my own in Dallas, setting up fierce boundaries at work so that I am allowed to create in the way that fits me best, trying out theater again, traveling solo internationally, singing karaoke at places all over the world, training muay thai in Thailand. All scary things that seemed impossible to me at one point in my life, but now they are things I have experienced and loved.

It might not look like that to the objective bystander, but that’s the thing … I keep trying things that for whatever reason aren’t that scary for me now. Singing a new song in a completely new place … not that scary. Trying out a new dance class … uncomfortable, but not that scary. Traveling to a foreign country … well, a little scary but the excitement of it all outweighs any fear.

I’ve been pondering this fact recently due to a podcast I listened to that my best friend recommended. It was the Tim Ferris podcast featuring Dropbox founder Drew Houston. In the podcast, Drew talks about his struggles and triumphs in founding Dropbox which is all very inspiring and fascinating. But what actually stood out the most to me was when he talked about giving the commencement speech at MIT in 2013. In that speech he said if he could’ve given himself a cheat sheet when he graduated it would have had three things on it. A tennis ball, a circle and the number 30,000.

The tennis ball and the circle are both important themes to discuss, but what really stood out the most to me was the number 30,000. This is the number of days you would live if you are lucky and healthy enough to make it to the age of 82. 30,000. It’s not a lot, not really. Not when you do the simple math and realize that at age 36 I’ve already lived over 13,000 of those days.

That number has been weighing on me. 30,000. That’s all. And what will they mean in the end? Am I living them bravely? Am I taking the risks I need to?

When I was younger, I used to define ’success’ as having a home, a husband and a decent job. Then I found I had all of those things by the age of 30, but … my life was woefully unfulfilling.

At 31 something happened. I don’t know why but all of a sudden some deeper emotional shifts began. I’ve talked about this before but while there were many reasons why I left my ex, the greatest reason had to do with this number, 30,000, even before I knew what this number was. At 31 I looked at my life and went, fuck me, if this is what I’m going to do the rest of my life, I think I’m going to be miserable.

So, after saying yes to some small things that scared me, I eventually took one of the biggest leaps I’ve ever taken in my life. And although there are things I wished I’d handled differently, I never once regretted taking that leap to find out who I was on my own, to walk away from a stable, structured, successful life into the wild unknown of self-discovery and singledom.

Strangely enough, so many things during that season just ‘lined up’. Jobs, money, friends, everything seemed to be flowing in this creative direction that just seemed to prove I was on the right path.

But then, March 2017 happened. And … everything in my heart and mind was turned upside down. (Broken heart, banned from bar, yadda yadda)

See the thing is … I had taken a leap. And it had broken me.

I fell in love with someone I knew could break my heart. It was … terrifying. But the thing is? Even though that guy, that affair, was in so many ways the WRONG thing to be involved in, for me … it was actually the VERY thing I had to do. I knew it when I met him. The tingling, the fear … I had to go through it.

Because at my core, I know I’m not someone who wants to spend my life wondering … what if I’d said yes instead of no?

So .. I said yes to something that was incredibly scary to me. Falling completely and openly for a man who had the potential to really break my heart, in a way no other man before him could. It was … a weird, screwed up, all kinds of backwards approach to vulnerability, but that was my path and even now, I know I did the right thing.

That being said … when things explode in the way they did, it makes a person gun-shy. I took a leap and I fell all the way back down to earth. Alone.

And it makes a person … question … every thing they’ve learned, question their own intuition. I stopped taking leaps because the last one hurt so very, very much.

But that damn pesky number … 30,000 days. That’s all. And it’s hitting me hard, with both my career and my love life.

I have been lucky enough to find jobs that I really enjoy. And for a long time, I really took a lot of value from them. But recently, I’ve started to look at what I’m actually ‘doing’ at my job and I’m questioning … am I settling? For a job that pays well, treats me ok with the exception of a little stress and abuse here and there, is mildly entertaining, but really isn’t my … passion? Am I too afraid to go find my passion?

What does it mean for me to be brave in my career?

I’ll just be honest and upfront and tell you, my friend and I want to start a podcast. We want to write on our blogs and find a way to be creatively fulfilled on our own. Even as I write that, I can hear those old familiar voices ‘Well, everyone wants THAT. Why do you think you’re so special?’

But underneath that I feel … a tingling. An excitement. A question. What if I said yes to trying this out instead of no? What if I just … tried? What if I took a small leap? And then another leap after that?

So it’s time. Time to experiment with failure. Time to get comfortable with being uncomfortable. With my creative pursuits, this means being vulnerable here on my blog. It means telling my awkward, messy, anxious, brave truth with 100% honesty and authenticity. Even if that truth makes me want to cringe and hide. It means trying some shit, experimenting, seeing what works. It means being willing to risk looking foolish and feeling embarrassed. It means acknowledging that there will be some setbacks and likely some all out failures, but that is ok. It means standing up to the nay-sayers who think they are giving helpful advice when they say ‘well, a lot of people want to do that and don’t make it.’ And most of the time that nay-sayer will be my own voice in my head.

The thing is, that is true. We’re not that special. And a lot of people don’t make it, a lot of people fail, but why not TRY? We have 30,000 days, if we’re LUCKY. Why not go all out in the pursuit of what you want? And maybe you’re (I’m) too scared to admit, I’m not sure what that even IS yet. That’s ok! I’m no longer going to allow fear of success and fear of failure to dictate what I pursue creatively. I’m no longer going to be afraid of the things I don’t know yet.

Now, here’s the harder part for me. Relationships. Love. Dating. Ugh. What does it look like to take the leap here?

I’ve taken a mini-hiatus from dating, but I think it’s time to get back in there and try. I think it’s gonna require .. emotional bravery. TRUE forgiveness. Of myself and others. So that I can truly learn to listen to my heart once more and not run away the next time I feel that familiar tingling. That excitement and hopefulness. I won’t run from it, I won’t assume the worst. I’ll walk into it as if my heart has never been broken.

To love with a heart that’s never been broken. THAT is bravery. Courage. Risk.

I think I’m up for that leap of faith.

NOTE: This post was originally published on SexandtheBigD.com on September 26, 2018

#blackouttuesday
I am a huge believer in the power of journaling. ⁣
I try to start each day by journaling. I adopted this habit during a time in my life when I was despondent over my career & desperate to make a change. A friend suggested journaling my thoughts daily as a powerful way to not only work through my feelings but also to visualize my goals & dreams. This little practice drastically changed my life.
I miss humans.⁣⁣⁣
I love a good bath. Bubbles, bath salts, mimosas, oh my.⁣
When this quarantine first began, I was filled with a lot of anxiety. And pressure. I’m lucky to be able to work from home and my job is centered on online aspects of our business, so my team is pretty vital to the company at the moment. I have worked the last two weekends and I’ve been eager to do so. Maybe because sitting still and being stuck at home is something very foreign and uncomfortable to me.⁣⁣
%d bloggers like this: