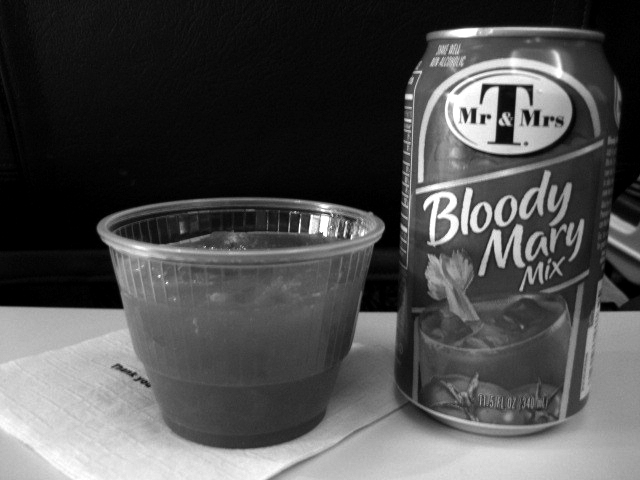 Game of Chance and Sacrifice

Right now, I sit within a plane. One of the few possibly remaining trips I shall take within the bounds of the company to which I currently prostitute my time. And shamelessly, boundlessly, free – I just asked for two cans of bloody mary mix.

Two cans of this sweet juice that oozes from hell’s very wounds. No vodka. No, don’t need it. For when one is hungry enough, two cans of this tastebud tantalizer makes for such a lovely meal. Perhaps not for you. But since they didn’t have the chicken wrap I first requested, I was wonderfully delighted to ask for not 1, but 2 cans. And with the first sip, a symphony of flavors, spices and temperatures flowed generously into my mouth hole. And here’s the beautiful thing… I can guzzle the first can with greed and lust. And the second can? Well, while my belly swirls with gluttonous sodium wonder, I can sip and cherish the second. At my leisure; at my own pace. I can delight in the fact that my belly is swollen and uncomfortable. A joy to have at the expense of such a divine experience.

I have never been able to do this before. Nope. Wrought with fear of what the airline stewardess may think of me, with what the guests sitting next to me may think of me, hell, with my own judgments of myself and of how a “lady” should behave, I have shied away from such bold requests in the past. But no longer. For I have unearthed a divine secret of late… A divine secret indeed.

Ready for this? Shhhh…. Here it comes…

Yep. in the wise words of Bill Murray, who clearly picked this up long before I did: “It. just. doesn’t. fucking. matter.” (The fucking was mine – I added “fucking”)

Sure, sure. I’ve heard it before. I know we shouldn’t care what others think of us. But yet we do. And why do we? Who told us we had to? Who taught us that it was important what others thought of us?

This is the lesson I am learning right now. That what others think of me just doesn’t matter. They are free to think their thoughts, judge, and perceive me as they wish. That is their freedom.

Do you know the best part? It doesn’t matter what I think of me either. That’s the kicker – I have played this game for far too long, because I am just getting this, for reals.

Let’s break this down. Part of my journey of late has been leading me to this very thing. I have suffered so greatly under the weight of what I have thought other people were thinking of me. Yes, you read that correctly. What I have thought other people, very well may or may not, have been thinking of me. Do you see the idiocy in that? How can I POSSIBLY KNOW what others actually think of me? This is ridiculous.

Oh but wait. My lunacy extends further. I have been trained for 3 decades in the ways of the world. I’ve learned the standards. I’ve learned the typical acceptable behaviors that are desired from me in order to be perceived as admirable, likable, reputable, successful, etc. I have learned these things from such an early age, it pains me to realize how long I have been under this influence. Since a child, somewhere someone taught me that I needed admiration, respect, appreciation. It wasn’t presented as an option.

And so operating under the guise of this influence, I have slaved and it’s cost me greatly. I have worked tirelessly on my body with the intent to gain appreciation from men and admiration from women. I have worked tirelessly on my mind with the intent to gain appreciation from my co-workers. I have worked tirelessly on my studies with the intent to gain respect and clout from my peers. What have I recently woken up to? It doesn’t matter. And It’s not their fault. Hell, it’s not even really my fault. I have simply bought the bill of goods I was first sold. I was young, I didn’t know any better… But I burnt out. I gave in. I spent the next 36 years suffering and spinning my wheels trying to appease some bottomless standard, trying to attain some generic and empty acceptance by a vast majority, until no life was left. I didn’t do those things because I wanted to. I did them because I thought I needed them.

No one told me there was another way. No one taught me that I could question my original foundational desire to even want appreciation, respect, success, etc. No one told me I had the choice. Well, that’s not fair – Perhaps they did, and I just didn’t have the ears to hear it.

I’ve played and have fought to earn my points in society’s little fucking game of chance and sacrifice.

On the flip side, no one ever told me that the chills you receive from a beautiful piece of music were enough. That the wonder of watching a common bird busy and building its nest is miraculous. That the flecks of blue and green that make up your guy’s eyes, is otherworldly. That watching the breeze tickle and dance through the trees is the witnessing of an act of love and worship in and of itself. That you can sell your house if you can’t make your payment anymore. That you can wait tables again even if you have a master’s degree. That you can do the things you actually enjoy, instead of a bunch of shit you’re told you should do in order to “have” enjoyment.

No one told me. Until someone did. A message from the dead. Preserved and encased in imprinted video recordings and splattered inked words from a last recorded speech. A voice from the other side. Otherworldly news to my ears. Freedom. Costly, precious freedom.

What does freedom cost? Everything. It costs your deluded addictions to these concepts of success, appreciation, admiration, and perceived comforts.  It costs your illusions of what is meaningful and delusions to what you think you need. It costs your stupid goals and your misplaced identities.

Ahh, but once you drop it all? Freedom. Sweet, costly, freedom.

And the prize of it all? Enjoying the now. When you “have” nothing anyway. All that we work for, all that we push for, strive for – it’s not ours anyway. What a joke, right? Oh, how terribly foolish we all are. So, so foolish. We thought it was ours.

And how lovely. How lovely to not be imprisoned in the world that tries to chain you, berates you, keeps you on its system of checks and (im)balances and demanding unrequited sacrifice and chance. We submit ourselves to the mercy of this system when it’s been a mechanical operation since the beginning. Pre-programmed to deliver random occurrences that we helplessly try to reason and make sense of, chastising and condemning ourselves before the great robot. The great unfeeling, unreal, miraged Robot of life.

How did I not see – it’s all a joke? Wealth, Attainment, Respect… it’s all been a joke. I cared way too much. I attached to these things way too much. Wielding the power of the attainment or lack of attainment of those things as the final call on the identity of me.

How can I return to the land of the game? How can I enter back in? Once you’ve seen, once you’ve tasted – how does one return? One does not. One cannot. One is left in the new free space, a beautiful, still silence that nourishes and is made up of all the most perfect things – all that just is, as it is.

Unbound. Unchained. Full of quiet. Full of complete and beautiful allowance for what is, as it is, and curiosity for what is to come. And enjoying every fucking little moment – or in my case, 2 cans of bloody mary mix – in between.

Enjoy your bloody mary mix, folks. Enjoy the shit out of it. Because it just doesn’t matter.

#blackouttuesday
I am a huge believer in the power of journaling. ⁣
I try to start each day by journaling. I adopted this habit during a time in my life when I was despondent over my career & desperate to make a change. A friend suggested journaling my thoughts daily as a powerful way to not only work through my feelings but also to visualize my goals & dreams. This little practice drastically changed my life.
I miss humans.⁣⁣⁣
I love a good bath. Bubbles, bath salts, mimosas, oh my.⁣
When this quarantine first began, I was filled with a lot of anxiety. And pressure. I’m lucky to be able to work from home and my job is centered on online aspects of our business, so my team is pretty vital to the company at the moment. I have worked the last two weekends and I’ve been eager to do so. Maybe because sitting still and being stuck at home is something very foreign and uncomfortable to me.⁣⁣
Loading Comments...
%d bloggers like this: